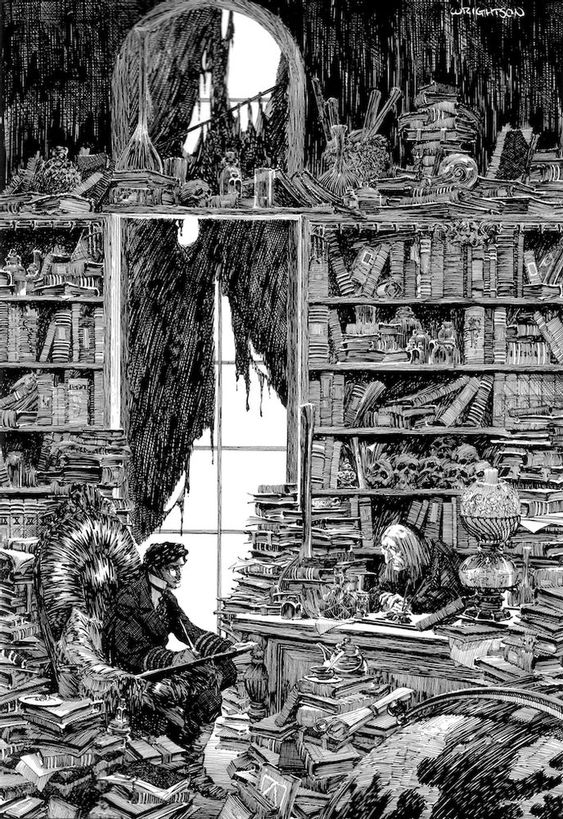 More black books to add to your collection.
Parable Of The Insurer
The extant copies of a late 17th century chapbook detailing the tale of a scurrilous purveyor of maritime insurance who refuses to pay out to the owner of a "black galley" who lost his cargo fighting "frog-men off the yellow moons." The shipowner then subjects the steadfast insurer to serious of threats and torments till he caves and quits the business to go live as a monk. The exact moral is unclear.
The Devil's Dress
An account of a Parisian seamstresses dream-voyages to hell at behest of Asmodeus himself in order to fashion him a proper suit for the upcoming "pandemonium." Detailed description is made of various demonic fashions and their manufacture with an ethnographic degree of seriousness.
Fragment I-IX (The Los Angeles Rosetta)
A collection of clay tablets found buried in a backyard during excavations for an outdoor pool. They contain matched writing in archaic Spanish and an unknown language of stamped ovaloid orthography. The text itself is a missive bidding the recipient to burn their ships, hide their tools, and ready the new "converts" for battle.
The Speculographer's Atlas
An atlas of speculative, imaginary, and mythic cities, their locations, and methods of reaching them. The oldest probable copy is dated to the 11th century under the title "Urbes Secreta" or the Secret Cities, however no know extent copy survives. Over the centuries numerous copied, annotated, and revised editions have emerged, been lost, destroyed, and on. Barring the Neo-Delvers Digest there are few other living occult texts of such extent.While the 1975 edition is easily accessible, prospective occultists are cautioned against it for many of its entries are outdated, false, or mistranslated.
Descent Into The Anti-City
An epistolary novel, told through journal entries and communiques, recounting the expedition of Captain Leroy Fitzgerald of the Unite States Engineer Corp into unidentified structural works beneath an unnamed metropolitan area. The narration eventually devolves into increasingly verbose description of the architectural un-realities. Widely panned by critics for purple prose, obtuseness and abrupt ending.
How To Build A Dog!
An illustrated children's book, originally published in French, describing in detail how to construct a dog from the "essential saltes of the earth." Listed as suitable for ages 10-12. Briefly hit bestseller lists before being pulled from shelves after parental complaints.
Snead's 110
A list of 110 esoteric books for auction, reproduction, or print from the infamous Snead's of London. It has been reprinted numerous times since the 1781 fire which killed Mister Snead and subsequently ended the firm. Lost listings such as "The Vicar's Methods" are commonly hunted for and the subject of legend in occult book circles.
The Ballistic Gospel
A heretical manuscript compelled from the journal of a 16th century Spanish artilleryman which elevates Saint Barbara from martyr to the true aspect of god. It foretells an apocalypse to come with weapons undreamt of and "mighty rockets which shall unleash dreadful ever-burning balefire." A fairly standard pre-modern prophetization of nuclear war.
at August 05, 2022