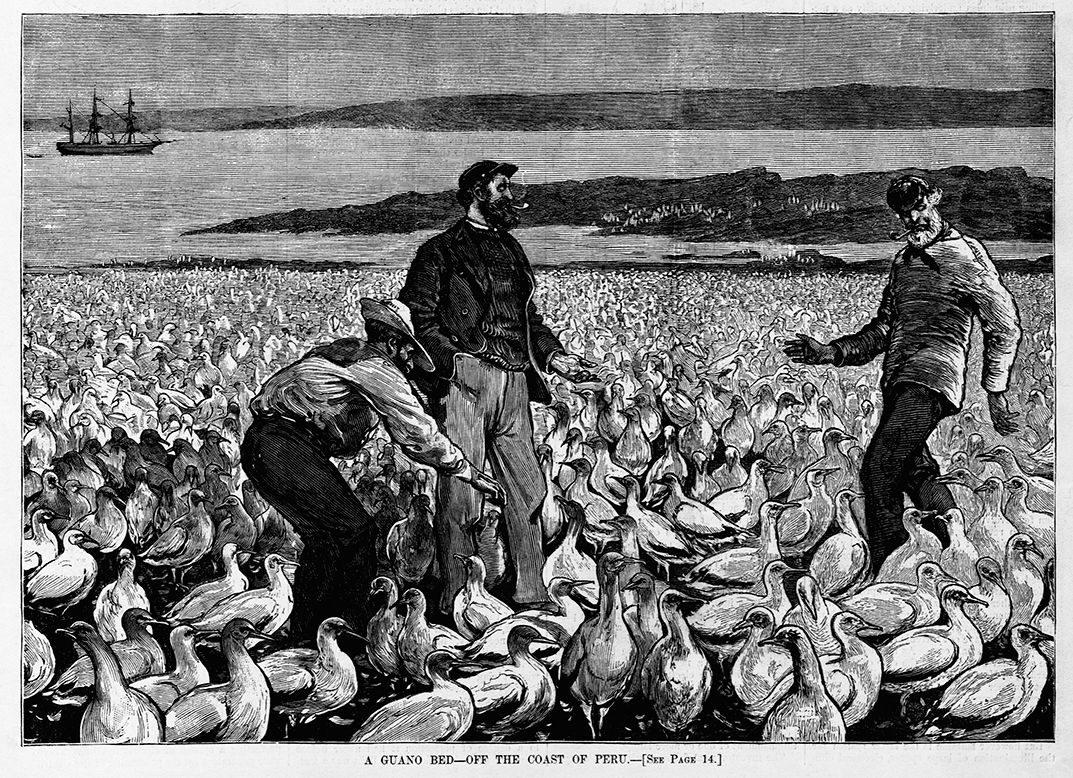 Out where deep country meets deep water, on a handful of rocky islands under the baking sun, layers of bird shit strata have hardened into rich, white gold. Blasted, chipped, and shoveled out. Loaded into freighters to take back to Bastion where it becomes saltpeter, fertilizer, and all manner of products.
Among the innumerable sea birds might be found...
1-4: d8 Convict Shovelers - STR 13, 3hp, Shovels & Picks (d6), Manacles, Grimy Overalls. Want to escape from this life sentence of grueling labour. Watched over by a lone, surly Guard - 6hp, Whip (d4), Musket (d8), Officious Hat.
1 : Hauling bags of guano down a dangerous cliff to be loaded onto a barge.
2 : Watching a fellow prisoner be whipped for killing a gull.
3 : Fistfighting, a distraction so that another convict can steal a stick of dynamite.
4 : Sitting about and refusing to work despite overseer's threats.
5-8: The Great Auk - STR 18, 10hp, Stomping (d8), Snapping Beak (d10). Wants to eat tiny tasty things, like you.
5 : Goofily chasing panicked convicts along the shore.
6 : Bobbing its head, flapping its wings, and practicing its mating display.
7 : Grooming its feathers in the sun.
8 : Swimming about, unbeknownsteadly hunted by an obsessive sea captain in his rowboat.
9-11: d8 Egg-Eaters - DEX 15, 5hp, Cudgels (d6), Bird Masks, Camouflage Feather-cloaks. Want to become like the island's sea birds and encourage others to that end.
9 : Stalking a clueless surveyor, intent on kidnapping him for induction.
10 : Dancing a ritual out on the cliff-tops, concluding with one leaping off and transforming into a cormorant.
11 : Perched atop the rocks practicing gull-calls.
12-15: Fortinbrasic Marines - (detachment) STR 15, 8hp, Muskets (d8), Shakos, Red Cockades. Want to evict the Bastionese industrialists from the islands which they claim belong to their (Failed) City.
12 : Unloading a cannon from a landing boat amid the surf and squawking gulls.
13 : Lost, their officers argue over a poorly drawn map.
14 : Torching a collection of mining shacks and taking people prisoner.
15 : Miserably encamped, eating spoilt tinned meat.
16-18: d2 Steam Lorries - Ponderously hauling guano along the rocky paths. Each crewed by a Driver and Stoker - 4hp, Pistol or Coal Shovel (d6), Flatcaps.
16 : Flying along at dangerous speeds in the hands of a joyriding convict, pursued by crew.
17 : Taking a pack of investors from Bastion on a tour of the island's mines.
18 : Broken down, scalding steam venting everywhere.
19-20 "Ghost Of The Isles" - Bertrand Obel, Ex-Naturalist : WIL 16, Sheets, Wailing. Wants to drive everyone from the islands leaving them pristine, utilizes his Phobic Lamp - those caught in the light see the worst thing they can imagine.
19 : Charging down a hillside yelling, driving a storm of panicked gulls ahead of him.
20 : Hiding behind a rock, quickly sketching an interesting sea-bird.
at June 20, 2022

Email ThisBlogThis!Share to TwitterShare to FacebookShare to Pinterest
Tags: bastionland