I have hopped on the ol' bandwagon, following Tristan's AD&D Monster Manual Review and Marsworms' Fiend Folio Review to do my own Fiend Folio review ('cause that's the book I happen to have and like). Like the others I shall use a five star rating system. With that, let us begin with A-B!
Aarakocra
★★☆☆☆
Kinda meh, not really anything that really makes them unique or gameable other than the name and art (both which are good) and feels like your average bird person. 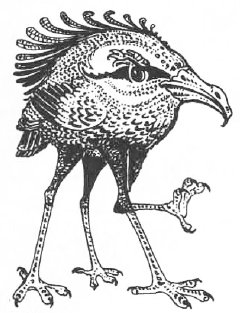 Achaierai
★★★★☆
Delightfully weird and wonky. Looks like something you would describe as 'trundling' I would kill to get someone to animate this thing moving. Totally looks like a Hieronymus Bosch painting character. I defer to Marsworms on all accounts here. Excellent beastie (could maybe use some more legs). 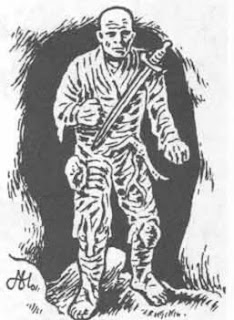 Adherer
★★☆☆☆
Can't really get behind honestly. Its adhering power is super cool (and I have half the mind to give it to like some martial artist as their special technique) but I can't really see how it fits in a world at all.
Aleax
★☆☆☆☆
Not particularly evocative or creative or even wacky, and does far too much world building (in a bad way) than I would like. Hard pass. It's design doesn't even tell us anything about the deity that sent it. Very bland (though the art could be neat for use as something else).
Algoid
★★★☆☆
I really enjoy the idea of a shambling mass of algae in the shape of a human, but the execution is a bit... off for me. The ability to control plants seems at odds with its sci-fi-esq thing it's got going. Psionic makes a bit more sense in the circumstances but it's a pity the whole thing is written so combat orientated. A shambling existential algae hive mind would make for a fantastic social encounter. Al-Mir'aj
★★☆☆☆
Eh, in terms of 'rabbits with other animal's features' I prefer the Jackalope personally. The text doesn't really provide any gameable material for interacting with it other than the fact that it could make 'a useful companion.' Maybe if the horn was valued for magical powers or medicinal properties? 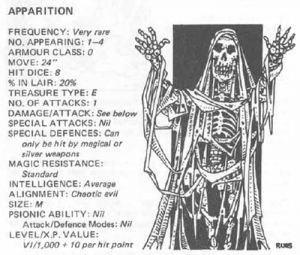 Apparition
★★★☆☆
A two star bumped up to three because of Russ Nicholson's excellent art. Disappointingly combat orientated and not really that different from other undead. I do like the bit about it not actually physically attacking but rather the victim feeling its bony claws on their throat. And Im a sucker for skeletons. 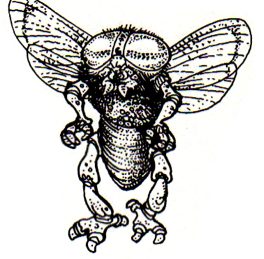 Assassin Bug
★★★☆☆
Good but not quite great. As a giant parasitic fly it has a lot of potential though. Given to someone with a better handle on writing evocative descriptions and this could easily be a four or even five star. Parasitic insects are always good game material.
Astral Searcher
★☆☆☆☆
Incredibly blandly written combat encounter without any neat art to save it. Theres a glimmer of potential in the idea of traumatic experiences ripping holes into reality and attacking people though. Otherwise this would be a zero star. 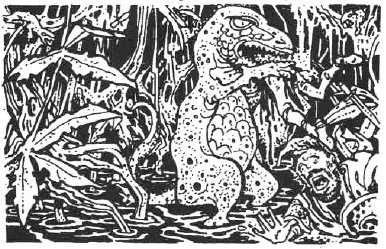 Babbler
★★★★★
Giant, cunning, human flesh loving, marsh living lizards that babble in their own tongue and can speak crudely in other languages. Excellent. Top quality. The art is delightful. Instantly gameable. I can imagine players being hunted by this creature, bribing it with corpses, learning its tongue (the language is described as defying efforts of analysis but bah, it's more fun if some people can talk to it). Love it.
Bat, giant
★☆☆☆☆
It's a bat. It's big. Only gets a star at all because I like bats. 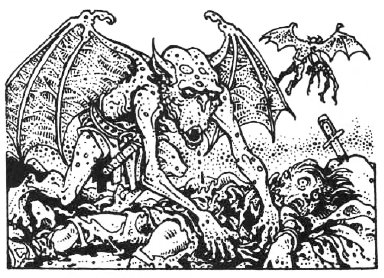 Berbalang
★★★★☆
I find this funky, bizarrely complicated fellow delightful. Sets itself up well as a 'mystery monster' whose actual location must be put together from clues. Its habits are a bit more complicated and longer than is ideal, I'd shorten them down myself. And expanding on what it does out on the astral plane could be really cool (I for one might make it very sophisticated out on the astral plain, being members of important astral cities but returning to the mortal plain to devour people.) Very good ideas all around. 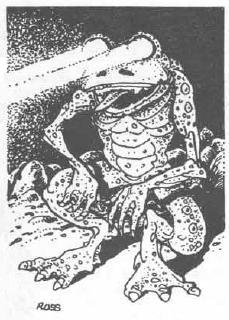 Blindheim
★★★★☆
Who doesn't like a weird toad fella with headlights for eyes? Could use a bit more development though. Unclear exactly what the thing does or how players are supposed to interact with it (besides murder). It would be cool to shrink them down a bit and make them tools people use and the players could acquire. Who needs a lantern? Just get a flashlight frog!
Blood Hawk
★★★☆☆
I like this critter. Birds in general are neat. The actual contents are, somewhat lackluster, basically just hawks that attack people, could use lots of improvement. One odd thing is that they're described as uniformly grey. Like, missed opportunity there, especially when Bearded Vultures exist. 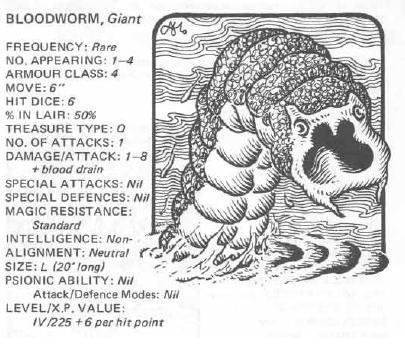 Bloodworm, giant
★★☆☆☆
As opposed to bloodworm, normal apparently. On one hand, worm, on the other it's basically a less interesting giant leech and is one of the few cases where the art actually detracts (leeches are creepy already, should have just used that).
Bonesnapper
★★☆☆☆
The name Bonesnapper is wayyyy more evocative than this creature deserves. I do find the detail about them decorating their lairs with collected bones to be fun, adds some life to it. Dislike the dinosaur connection, feels unnecessary. I'd make this critter something else besides a lizard. Maybe a bird?
Booka
★★★☆☆
I personally dislike these, but they're not really bad and I can see many ways they could be used in game. I just don't vibe with them. Pretty standard 'household trickster spirit' all around.

Bullywug
★★★★★
YES. FROG. EXCELLENT. LOVE IT. 10/10. FIVE STARS. Frogs are one of my weaknesses. The actual text just makes them fairly generic evil minions but FROG. The chameleon like camouflage is and interesting addition. Frog and toad folk are always great.
Bunyip
★★★☆☆
I rather like it, its not immediately hostile but rather is mischievous and playful and might try and tip your boat over, but also will go after small struggling things in the water.
More to come...
at December 27, 2020